I carried out three user testing sessions of two prototypes of the new editor for WordPress. Users were confident in their digital skills. Here are the results.

Full notes of the testing sessions

Prototype: “A beautiful thing about Apple…” 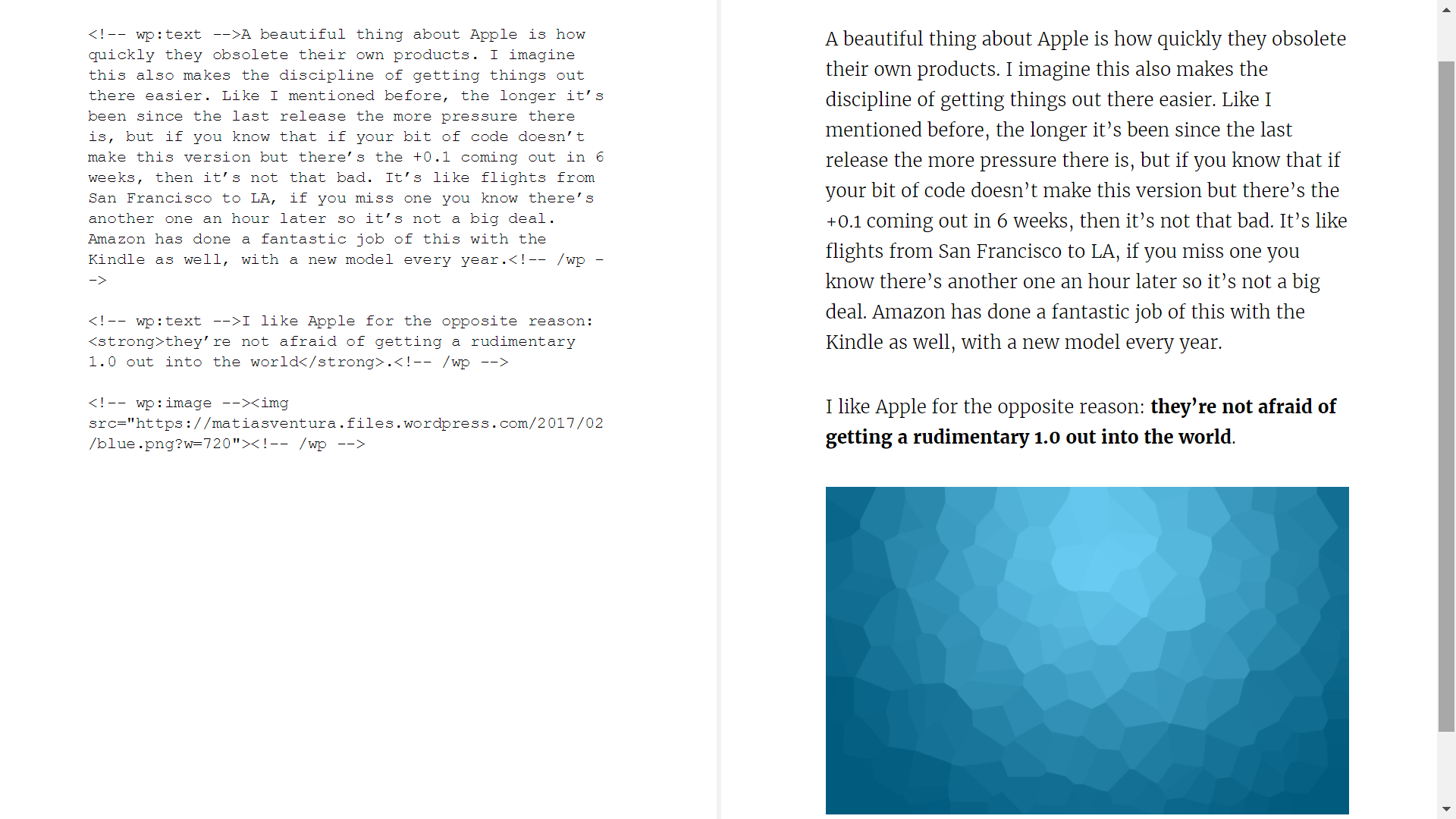 Clicks into a block and sees and instantly understands the alignment options.

Clicks on the ¶ symbol but it doesn’t do anything.
Expected it to be interactive as the mouse changed to a hand pointer, suggesting interactivity.

Clicks on the up arrow, but nothing happens. Wasn’t really sure what it would do.

Enters a line return to break up the paragraph of text, but isn’t able to do this.
Thought that the arrows up and down might allow the insertion of a line break.

Highlights text to make it bold and expects to have to use a keyboard shortcut as nothing was previously visible on the screen. But then notices the popup.
Comfortable with the options presented.

Heading and blockquote options don’t behave as expected. (Dismissed as a limitation of the prototype)

Understands the split between code and visual editors.

Likes the context-specific editing as it keeps the screen more focused.

Understands the concept of HTML and editable preview.

Wonders how valuable constant HTML visibility is to the average content editor. Will they break things? 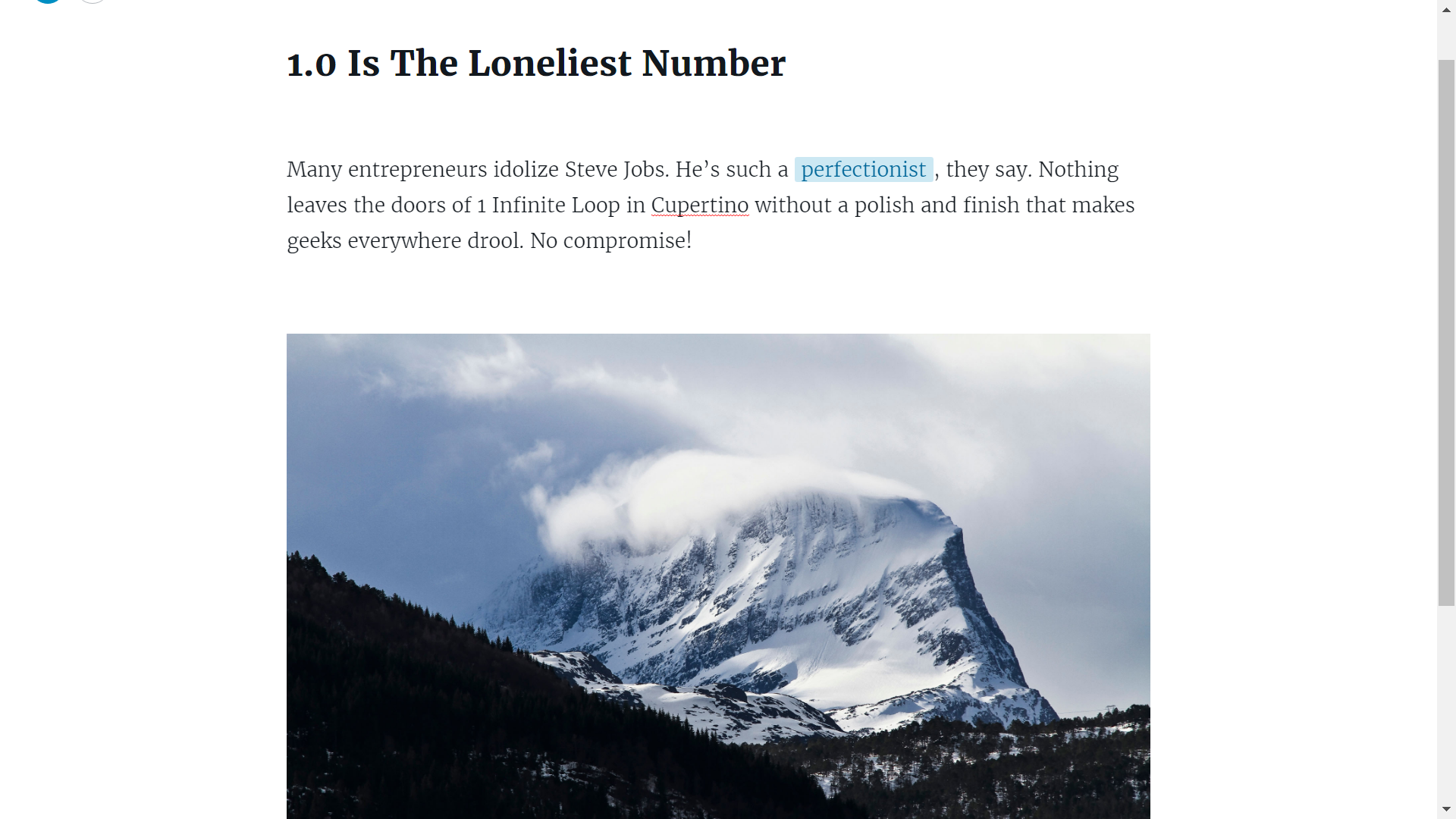 User expected to be able to insert line breaks. (How do we want to handle line breaks within paragraph blocks? Do we permit them, meaning that we have big text blocks, or do we take line breaks as denoting the start of a new paragraph block? I’d prefer the latter but haven’t thought about all use cases.)

Clicks on the paragraph of text, and then clicks on the ¶ symbol.
Changes to blockquote style from paragraph style.
Understands that this allows him to apply style to the block.

Scrolls down the page and clicks on the plus sign at the bottom.

When asked what this is, says that it’s “a shortcut to functions that you use regularly.”
When asked: what would you expect to happen if you clicked on one of these items?
“It would create a new paragraph, image, heading, quote, etc, which you’d then populate with content.”

Clicks into the block and manipulates alignment options – working as expected.

Clicks down arrow and block responds as expected. Understands that the page is made up of blocks and that these can be repositioned.

Clicks on “+” and explains that this will add a new block. More options than expected: expected just image or text, so the extra options are “a nice surprise”.

Drags and drops an image into the content block. (Is this something we want to design for?)

Clicks on ¶ – and changes the text block type

Clicks into the text block.
“I wonder what the arrow does” Clicks on the down arrow and sees the block move down. Understands it fine.

Looks at alignment options. “Does that do the whole block? It does”

In general, understands the popup text formatting and link options.
Not sure what the popup “S” with strikethrough icon means.

Clicks on the “+” sign, and understands that this is for adding blocks. Wonders how lists will interact with paragraph blocks, and how we could set levels of header.