This evening a sharp email campaign arrived in my inbox. It’s from Meetup, a platform for people to arrange in-person meetups around shared interests.

The content of the email is clear and focused: 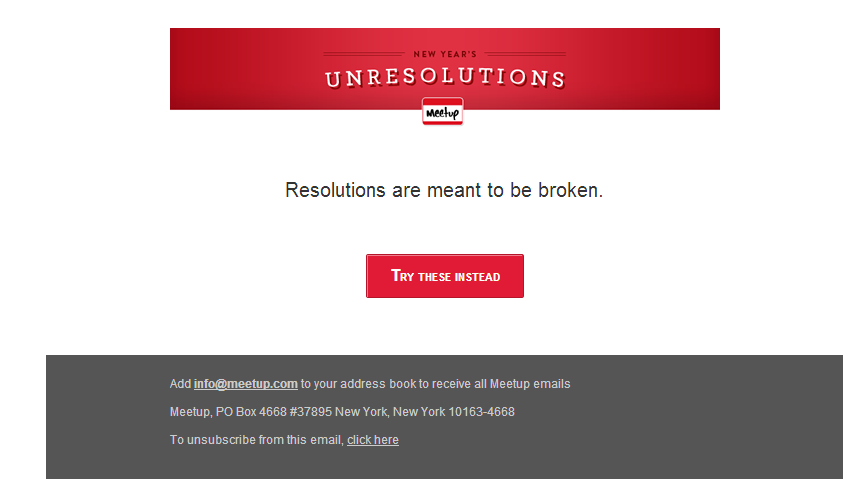 The body of the email has an intriguing statement and an invitation to positive action, with a deliciously chunky button, leading with the imperative “try”. So of course I clicked on it. 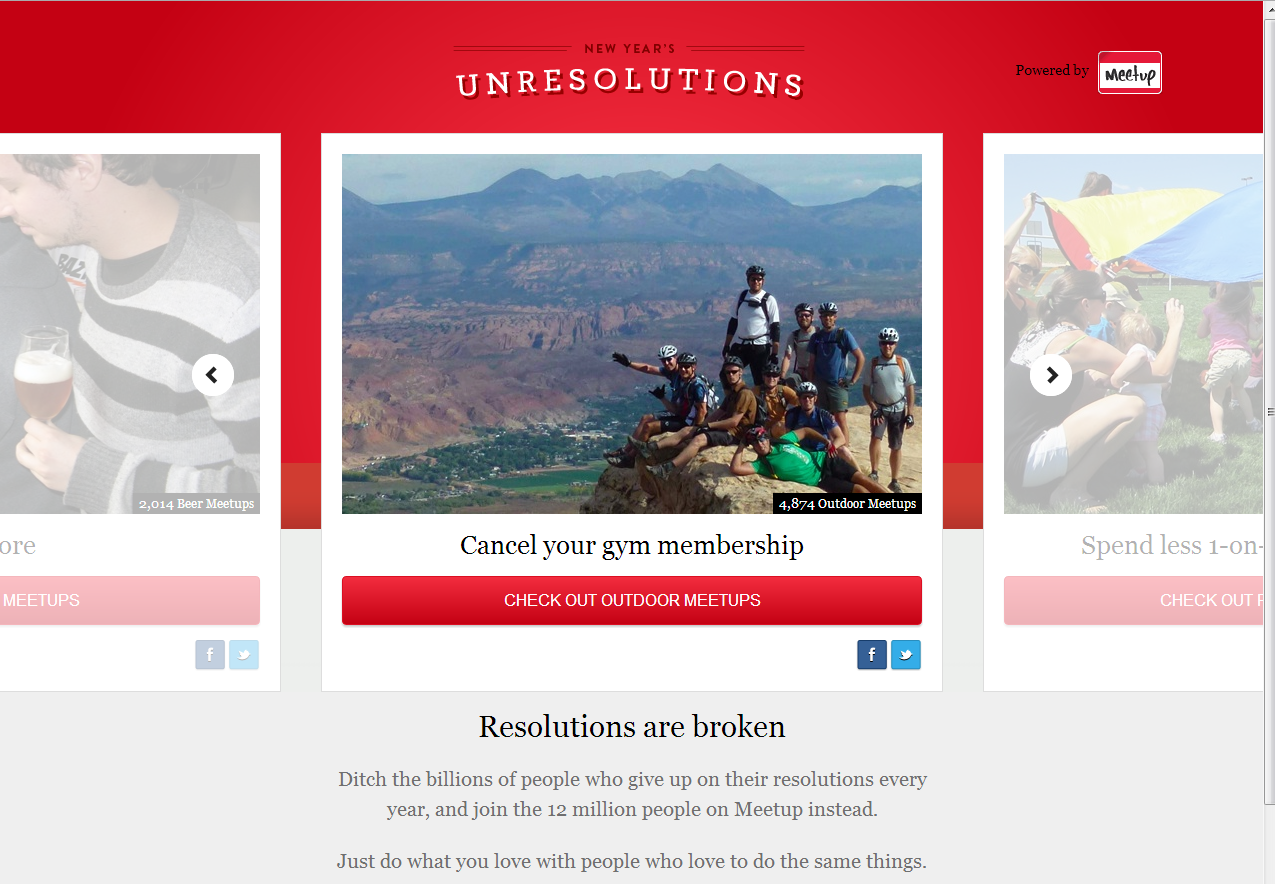 Strong visuals, focus on the central image and call to action, with other options invitingly waiting at both sides of the screen. The page covers a good range of options.

I like this campaign – it’s positive, empowering, expansive, exploratory and hopeful. Have you seen a good email campaign recently?

If you’re following more than fifty people on twitter, watching everything in a single stream of activity on twitter.com is probably tiring and frustrating.

The constant rush of messages can feel overwhelming, and it’s hard to make sense of what’s most important. If you follow accounts covering different topics, the diverse tweets can blend together into a confusing and unhelpful sludge.

The accounts you’re following probably fall into different categories, congregating around your different areas of interest. Organise them into lists for each of your interests.

So for my personal account I have online learning, charity digital, tech and gaming. When I check twitter, I can look at each of these lists, rather than having to navigate a torrent of disordered voices in my home feed.

It’s also much easier to see how active certain communities are, and who the prominent voices are, than just looking at your home feed.

2) Searches can be very useful, and you can do a lot more than just hashtags.

I follow a few hashtags using twitter searches (#mooc, #moocmooc, #cs50x, #cslondon12, #NFPtweetup and #oxengage are the main ones.) Here’s an example search for #mooc.

Searching for keywords rather than just hashtags can be a great way to come across relevant messages you otherwise wouldn’t see.

At Deafness Research UK I have a list of the most important accounts in hearing research, but there are always new voices to discover. So I have a search set up for: deafness OR hearing OR tinnitus OR ear AND research OR science OR breakthrough.

Of course, you can’t be perfect with these more prospective searches, and you’ll see a lot of irrelevant posts, but it’s a useful exercise nonetheless. In the above example, the tweets from aromatixteam, Science_Alerts and EquiisSavant seem to be worth a closer look.

3) A dedicated tool is more useful than twitter.com

Hootsuite and Tweetdeck are your main choices. I’ve used both, and settled on Hootsuite. They have very similar features, so mine was probably an aesthetic decision as much as anything else. (That and the fact that you used to have to install Tweetdeck, I think) I find Hootsuite’s light blue more appealing than Tweetdeck’s darker palette.

Being able to see multiple lists and streams (for example a search) at once is massively helpful. Here’s my home hootsuite dashboard (in 2 parts): 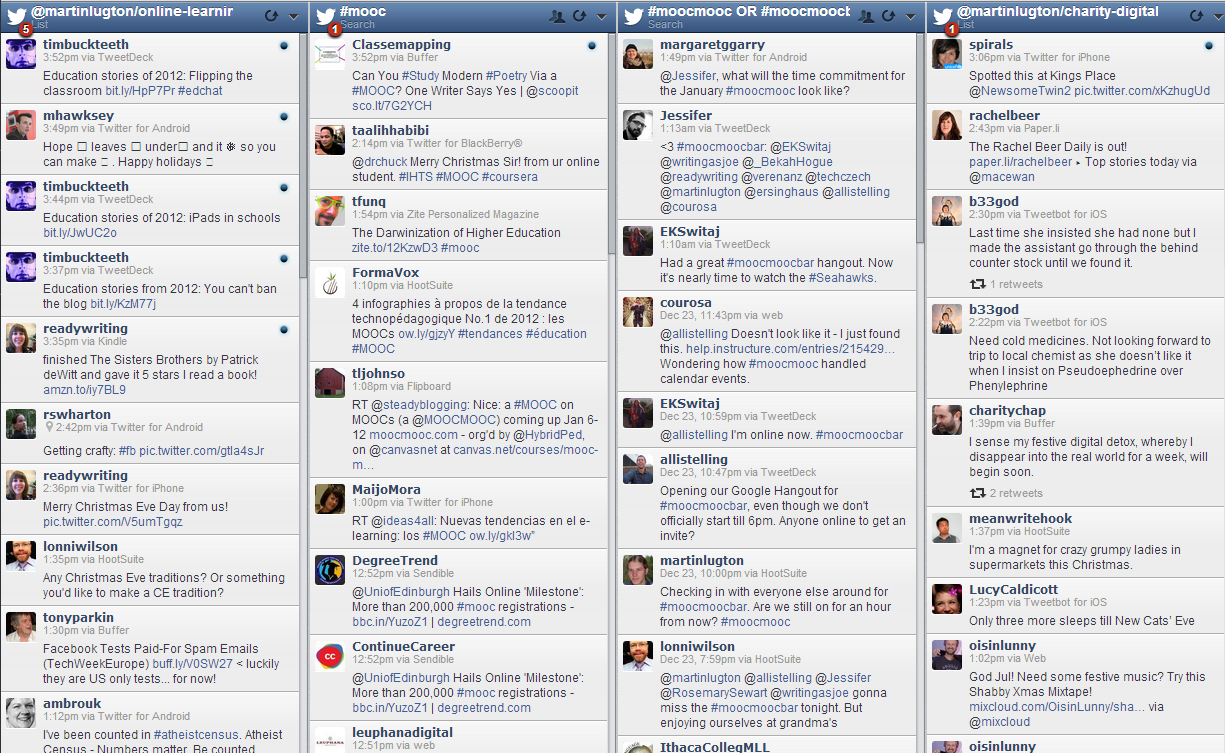 The ability to schedule up messages in advance can be helpful too, although you probably don’t want to overdo this:

4) Find out what works for you on twitter and what doesn’t.

Twitter isn’t the right medium for everything. Don’t be afraid to focus in on the best stuff and ditch the rest.

I don’t like sifting through noisy news sources on twitter. It takes much longer to filter through Mashable on twitter than it does to skim through all their posts and find the 5% or so I’m interested in if I’m using an RSS feed.

Similarly, there’s loads of news that I’m not interested in. And I don’t have time to watch breaking news on twitter, or to read in-depth analysis while at work.

So I follow these areas through RSS feeds, which get attention over breakfast, at lunch, and in the evening.

To be a good digital communicator is to be a lifelong learner.

The digital landscape keeps changing. Google alters its search algorithm; new services and platforms are released; user devices and expectations evolve; web standards develop; a new version of HTML or CSS is released; the legislative context shifts as the EU’s cookie laws are implemented. This means that our practices – and our instincts – need to be forever questioned and improved.

The toolkit of digital competencies isn’t a static box of best practice to absorb once and for all. Certainly there are some good foundations to acquire – an inquisitive, analytical mind; instincts for storytelling and visual design; a conceptual understanding of how the internet and websites work; an enjoyment of play, discovery and exploration; a logical approach; knowledge of HTML, CSS and any of the other web languages.

But the core digital competencies are inquisitiveness and an enthusiasm to engage in discourse with other people trying to understand and shape the digital landscape. A restlessness and a desire to figure out how things can be done – or could be done – better. A desire to understand what works and what doesn’t – particularly when evidence is hard to come by, and an open evangelism to share the results.

I find that making sense of the world around me by producing openly shared media is the best way for me to learn. Publicly sharing my thoughts as I try to work through them helps me formulate them more clearly. Working like this is a vulnerable position to be in; and sharing living work-in-progress rather than thoughts that are ‘finished’ means that I won’t always be ‘right’. Rather, I hope to be stimulating and encouraging.

In my posts here, I hope, by learning aloud, and in conversation with others, to help develop our knowledge of digital communications.